Tim Heard: gamer of all trades

My interest in video games began when I first started playing on the Sega Genesis and my father's MS-DOS computer in the early 1990s. I became a more regular gamer when I started playing the Sony Playstation around the time I was finishing middle school and starting junior high school. Within the period between my later years of high school and my graduation from a community college, video games have become my greatest passion. It was around then that I learned of the video game development and design programs offered by Becker College. Having found my calling, I became a student at Becker in September of 2013. Since then, I have learned many things behind video games including history, programming, design, and art. I have also been introduced to a variety of software tools that go into game creation (such as Unity and Game Maker), art design (like Adobe Photoshop and Illustrator), development, and production. Utilizing my resources with my part-time income and support from my family, I have been able to purchase additional books, Digital Content Creation (DCC) software, many games, and a variety of game consoles to enhance my studies. After graduating with a Bachelor's Degree in Game Design, I have been continuing my studies independently to expand my knowledge of other game development software not covered in the courses I took, perfecting my skills in game design, art, and programming, following relevant online tutorials, attend game jams and meetups whenever possible in order to increase connections, and sparing enough time to purchase and play various games as a hobby while also broadening my perspective as a gamer. With enough perseverance, I will at some point break into the video game industry via an internship and, later, a job. When that time comes, it is my sincere hope that I will have a sustainable career as a game designer.

I entered Becker College's Video Game program with my concentration in Game Development and Programming.

I switched my major from Game Development and Programming to Game Design. 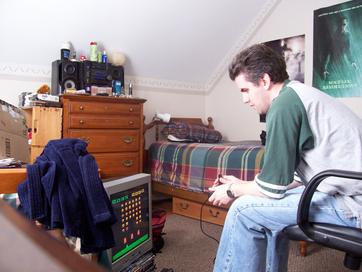 I first got into video games.

I became a full-time gamer, fully rounded to a variety of video game consoles.

I have completed my game design curriculum at Becker College with a Bachelor's Degree in Game Design.

One day, I will have an internship and, later, a job in the video game industry.